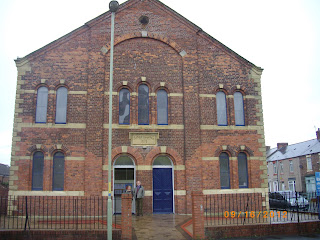 In 1864 the Baptist Union of Great Britain sent the Revd.. Charles Morgan to Jarrow,  with a view to establishing a baptist witness in the town.

Initial meetings were held in the homes of local people and then in the Mechanics Institute (Now the Civic Hall) .

A church building was errected in Grange Road West in 1966, which now acts as our Church Hall. The hall was used as a British Restaurant during the years of the second world war.

A greatly extended Church Building was opened in  1879, which has been used for church services up to the present time.

During the 1990's, a number of improvements were made to the Church Hall including the provision of a new roof, two new meeting rooms a toilet for disabled persons and access ramps.

In 2001 considerable work was undertaken to the Church Sanctury to iradicate dry rot, including the provision of a new floor. At the same time, the pews were replaced by chairs - so providing a flexible and comfortable worship area.
Posted by Unknown at 06:28 No comments: